Thought my resto might be of interest and I will most likely need some advice along the way. My girlfriend (now wife) and I bought the van back in 2003 and overhauled the interior to go on a two month trip through Europe and Morocco in 2004. We had a few wheel bearing issues but it mostly went smoothly and we covered over 5000 miles though some fairly rough roads. We've done plenty of trips around the UK and Europe since and have taken our daughters on those since 2008.

The van way resprayed before I bought it in 2003 and then again in 2008 and in my naivety, I thought that would be it for the next 20 years or so but it was just a respray and they didn't mention the state of the panels etc which I assumed were good. Over the years, when doing work under the van, I'd noticed some rust and it was getting progressively worse so I saved up and booked it in for a full resto in 2020 having stripped it myself to save some money. As it turned out, it was much worse than I or the bodyshop thought and it ended up taking two years and way, way more money than I had/have - will be paying it off for a while ! But it's staying in the family so will be worth it in the end.

I've attached some photos of before and after. 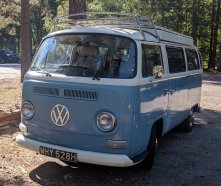 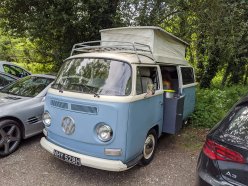 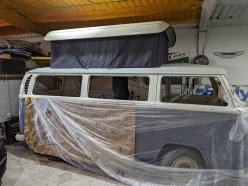 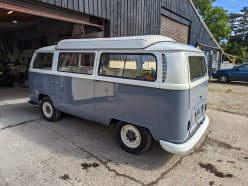 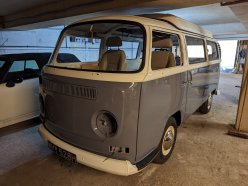 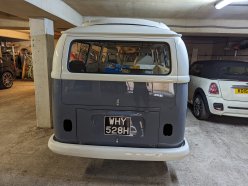 The old Devon roof was leaky despite having re-canvased the top and was causing mould and rust inside the van. So I decided to go for a straight lift roof from Spaceroofs which looks great and has a double bed, but this also ended up being more expensive than expected once specced to our requirements and caused a chunk of labour costs adapting the hole from the Devon roof and then fitting to the van.

I was bit overwhelmed when I got it back a couple of weeks ago but it's progressing nicely having fitted the front seats, stripped and sprayed the dash and all under dash mounting parts that looked too old and shoddy to re-fit. Also put the new wiring loom in today and even connected a few wires to the fuse box. Not looking forward to doing the rest of them though so will wait until I have more time on my hands.

Nice colour.
I hope your next post doesn't take around 9 years.

Looks really really nice... Keep up with the progress and keep the photos coming. It'll be back on the road soon enough and you can get back to enjoying it.

I couldn't help but notice the number plate... And reckon that was probably a word/question you may have asked yourself a few times throughout the process... Especially as the costs we're mounting up.

But don't worry... It'll be more than worth it

Great pictures and Reg Plate, keep the restoration updates coming and as said above it’ll all be worth it