Wannabay said:
A long time since I put anything on this thread
In 2015 we got a litesteer power steering unit fitted which was a revelation, then last winter, after several years of using the original danbury layout we decided on an interior makeover
so in spring 2016, Spaceroofs in Devon fitted a poptop with gas struts so it's really easy to raise and lower, and has side mesh panels which allow air to circulate, good when it's hot

and in summer i fitted a new interior from SJS VW in Southport to replace the original danbury interior, although I kept the original topbox having to cut it down to fit the new roof profile. It's a really practical layout with lots of cupboard space and the bed is slightly wider than the standard 3/4 width. I've since replaced the 'porta potti' seat by the sliding door with a rusty lee foldaway buddy seat to make better use of the space

then in August we got the ferry to Bilbao and drove back over 2 weeks via San Sebastien and the French atlantic coast...................and it was all worth it, we could stand up in the van, the R&R bed was a breeze compared to the danbury's diy effort, we had a fridge, hob and sink (although we cook and wash up oustide mainly) and we're looking forward to more adventures when it's warmer. I'll post details of our itinerary on the camping forum shortly
Click to expand...

Mike, hi, coincidentally I've just booked a reverse trip, Portsmouth - St Malo out, Bilbao - Portsmouth return, next summer, using a credit we had from last year, going to head for Ile D'Oleron again for a week, 2nd week yet to decide but further south
Some pics of 2016 trip
we arrived unknowingly at gran fiesta time in San Sebastien, so lots going on into the early hours with fireworks every night

Then on to the grand dune at Pyla, it's staggeringly huge

Head on to I'le D'Oleron, our fav, great for cycling round, seafood, beaches and a great pitch

Next stop Nantes, where surprise surprise there were boating and jazz festivals, plus we had to see the amazing mechanical elephant

Then on to the ferry for the trip back, in good company

I don’t know if you’ve seen my thread on Monty, but we went to France in July that year! We went from St Malo to Ile de Re and Noirmoutier en Ile. We also had a couple of nights at Bois Coudrais campsite as it’s handy for the ferry.

Just installed a pair of Suffolk seats from Newton Commercial, thanks to Mike for his help and advice, just need a trip to try them out 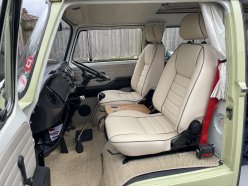 Glad you got them fitted in ok. They look very good 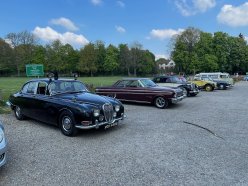 it was 'drive your car' day today with the local classic car club around north Kent, some interesting cars, a real ex met police Jag S type, ford falcon, Riley (conked out a couple of times but we got it going again) , tiny seat 600 (oil leak and prone to overheating), 2 CV (fun watching it wallow round the roundabouts), jensen C-v8 and my van; there was also a cool 1960's open top mustang and a 1980s vw polo
ended up at the white cross inn Bexley for refreshments, lovely to be out and about again