A Blast from the Past

Hey, So.. I've been lurking for a while and thought it was time to register and get involved.

Back in June this year I stumbled across a 71 Bay very local to me down here in Cornwall and would have been rude not to go and check it out. We'd not really been looking at all but always fancied an Early Bay to replace the then for sale T25 Panel Van we had and to cut a long story short we ended up doing a deal there and then. This particular Bay is a Californian 71 Deluxe and some of you may know it from way back in around 2015/16 when it was owned by Slammed72 who changed the look of this bus quite dramatically, take a look at the thread; https://earlybay.com/threads/1971-ratstoration.68119/page-5#post-602881

So, hows the bus now? We bought it knowing it's been through a couple of owners since then and if I'm honest I think a lot of love was lost for it and its lost some of the bits that made it. The cabinets have gone along with some of the Deluxe parts like the rear windows and even that engines been swapped out, even the suspension was raised...! So what are we working with, pretty much a blank canvas to put our mark on a pretty solid Cali Bus that needs a lot of loving to bring him back. The Gearbox was busted when we done the deal so thats the first job along with a engine refresh and to get it driving again, then the lows. 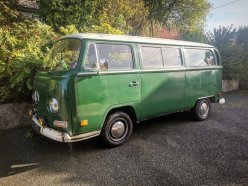 And when it was in a good place: 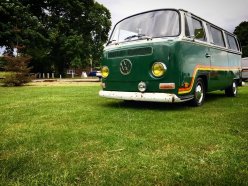 Looking for some inspiration with the interior as we want a full width bed, so lets see where that goes. The van never got flattened and polished after the last post so some work to do on that before adding a bit of patina..

Thanks for having us..

And still a very good looking bus either way up or down. Glad to have you joining us and look forward to you doing a thread.

Aw lovely looking bus!
Great it has some history on here.
Wishing you lots of joy with it!
Welcome to the forum

Looks nice, I did something similar with mine and replaced the interior with a full width R&R from Rusty Lee. Looking forward to seeing updates.

Hello and welcome. Enjoy the forum and your beautiful bus!
V

Many Thanks for the welcome and comments. Looking forward to getting this one on the road again and enjoy it.
Anyways Engine and Box is now out and Interior stripped.. Let the fun begin...

Good luck, and have fun!