The pedal set up on my 71 was not opening up the throttle fully -- just half way. Comparing photos of the linkage and bell crank to parts diag I realized the bellcrank was installed inverted reducing the leverage. I thought that should be an easy 30min fix. Well, not quite...

Here's the original set up. The lower linkage rod is on the shorter arm of the bell crank and the pedal on the longer

The crank was inserted from the left side of the mount, not from the right as it should be. This made the shorter arm point down and the longer one point horizontal and be hooked to the pedal instead. 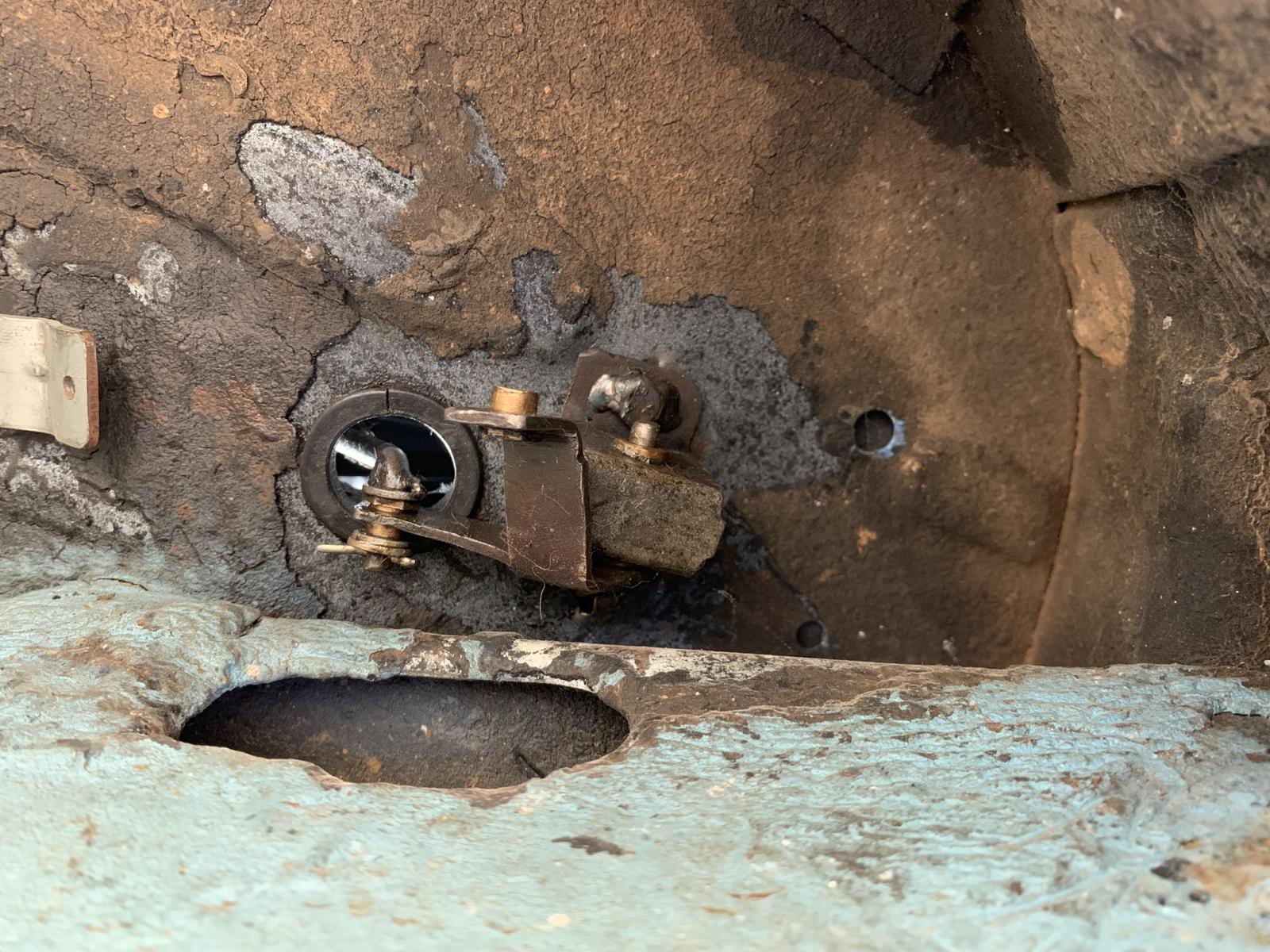 But, when I had removed the long link (link in the photo), I realized that there is not enough space on the left to pull out the bell crank as a cross member gets in the way. How did they install this??

Answer: By tearing out the mount and then welding bolts to refit it to the floor: 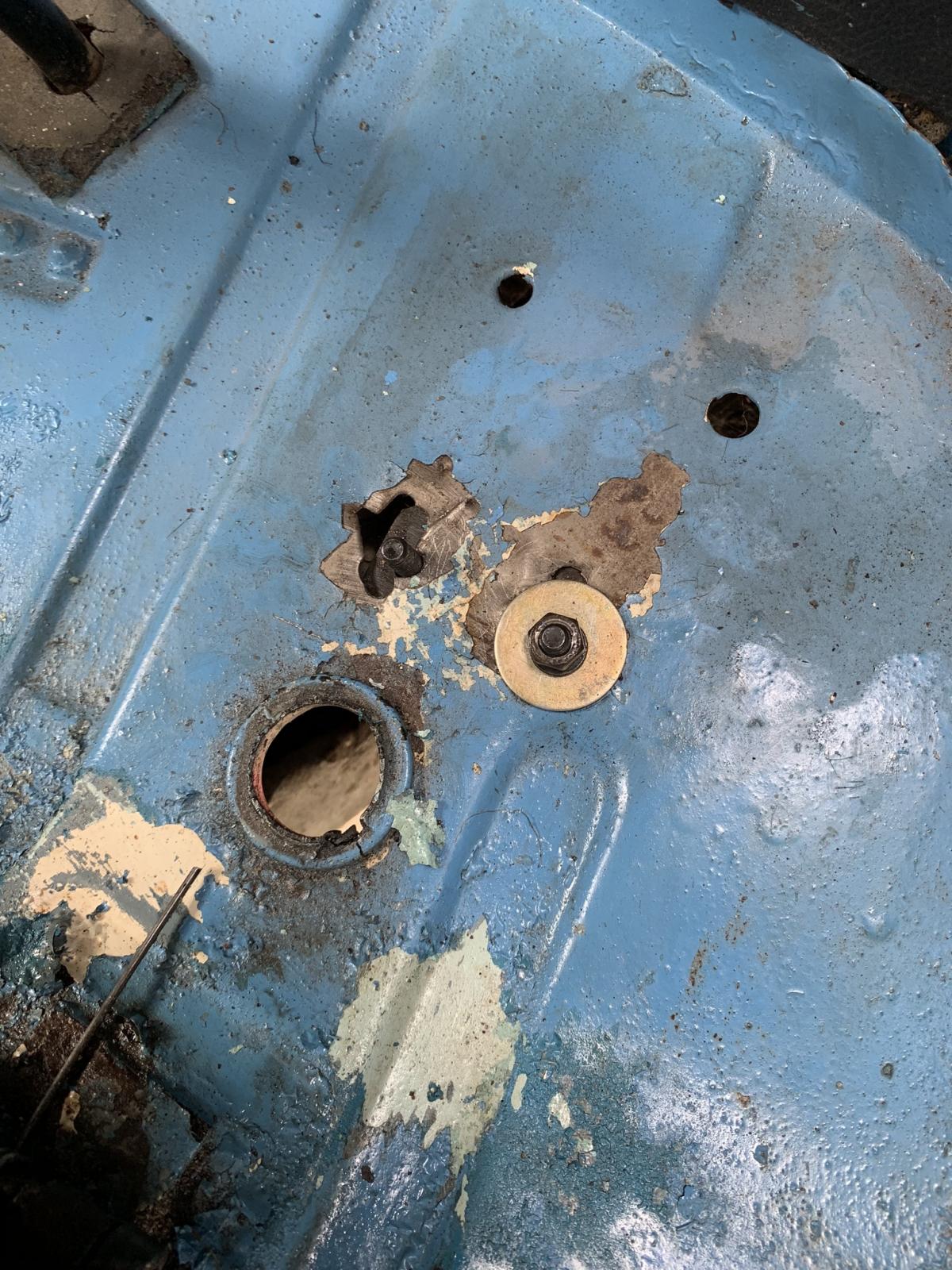 Once I got it out I realized refitting is going to be a challenge as the mount is not symmetrical - the thru hole on it is at an angle. So, I had to try both orientations. In one orientation (the first that I tried), it would bind. So, had to dismount it and reinstall. The previous mech had drilled and installed brass bushings to eliminate slop -- at first I thought it was good idea. But, the bushings also eliminate the little bit of flex needed to get the linkage inserted thru the holes in the cranks and pedal. So needed a lot of trial and error to figure out the combination in which the assembly would go back together. The original spring clips had been replaced by cotter pins -- but the holes had been drilled in inconvenient positions which made getting the pins in a challenge.

First I traced the linkage shape to have as reference. 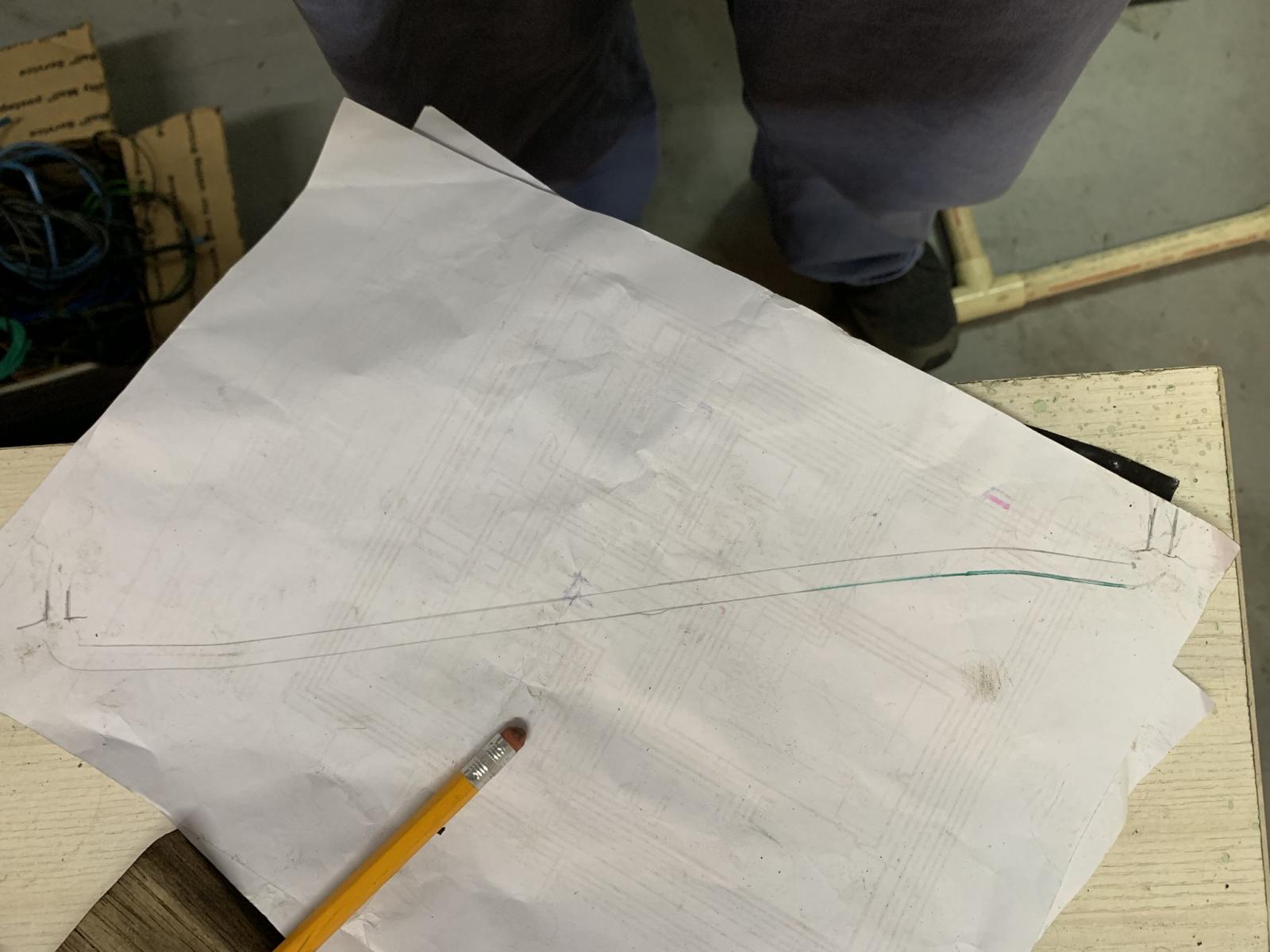 Then bent the linkage until it was shorter, but with the mounting ends maintaining a similar relative position. 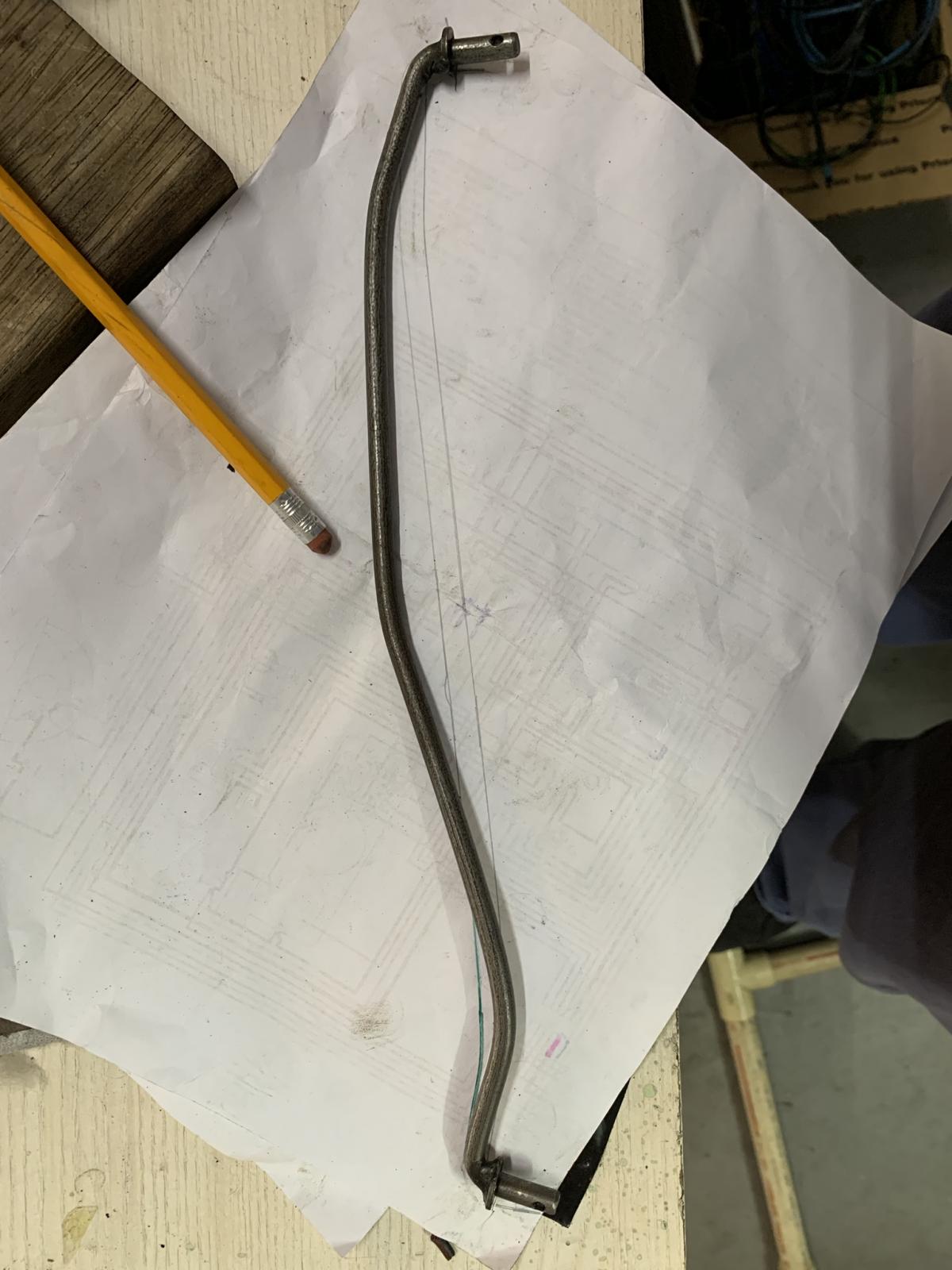 After a few cycles of trying, rebending, refitting, it finally slid it. 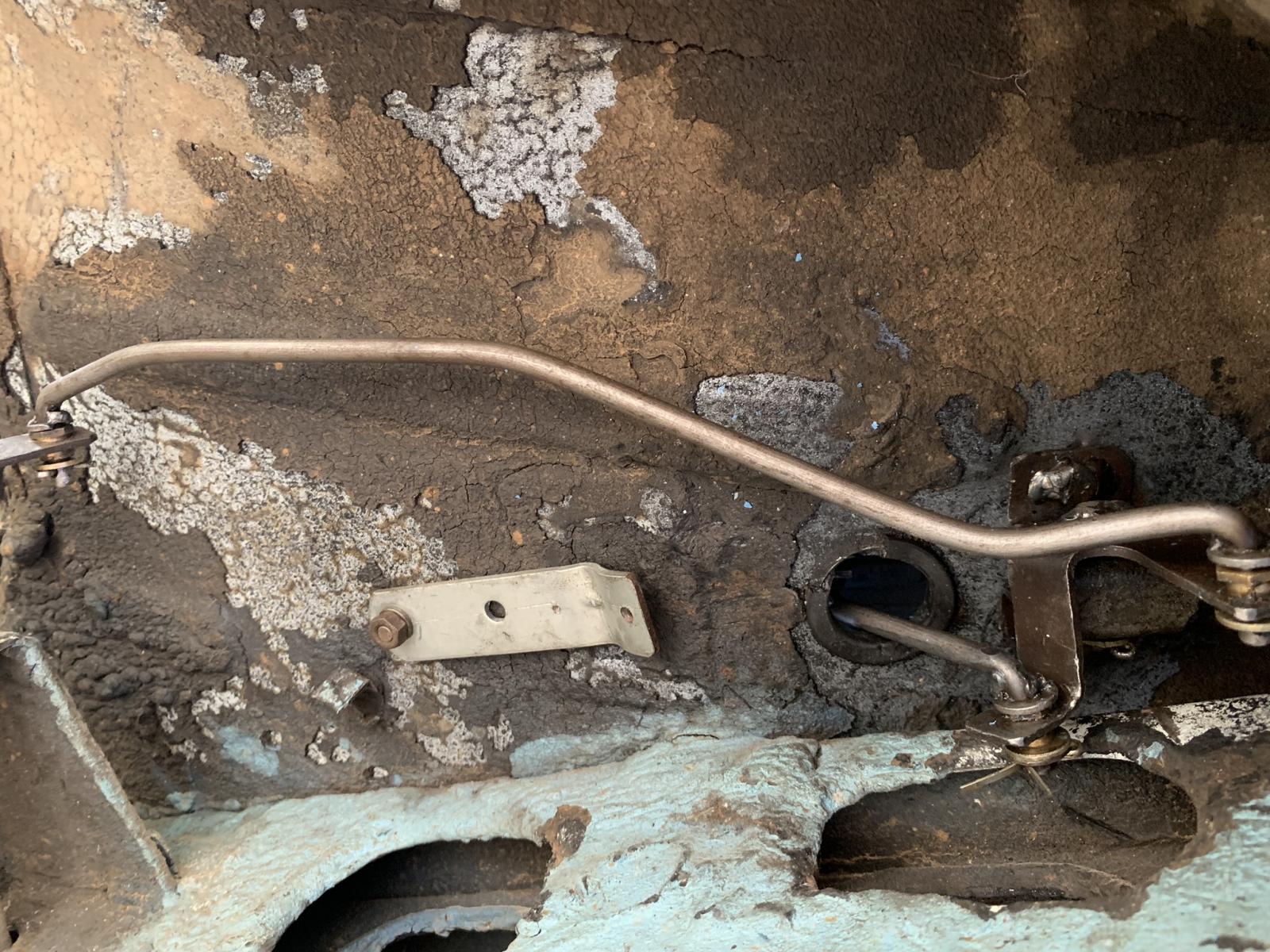 I then confirmed that the throttle opened fully.

I'm wondering why the lower linkage was off in length. I know there is an early linkage (till 69) and a 70-on available. VWHeritage does show 2 linkage of different lengths in a kit. What would the correct length be for a 71 RHD lower linkage? Part number 214721627A? Anyone have one handy to measure?

I plan to weld back the mount and repair the floor near it. Then replace the push rods with ball ends. I know Buty offers a kit. But, I don't need the bell crank and I think I can just buy some ball ends and create my own linkage locally vs. $100+shipping + 50% import duty for the kit from
VWHeritage or elsewhere.

Btw, I just discovered that VW Heritage sells just the pedal linkage for about $10. I think I'll buy 2, use one from pedal to bell crank and get a longer rod for the second and use that for the lower linkage. Anyone tried that?

100% confirm what these guys said, fitted the buttys linkage and oh my god what a difference! The PO had installed a new LHD floor pan on my RHD 71 and managed to weld a shitty home made hinge in the wrong place making the pedal foul the front of the bus! Installed the butty kit and all is 100 times better than previous, cheers Simon! I'm not going to get into the PO home made linkage using a few bits of bent threaded bar with nuts welded on... That's gunna be a thread of it's very own!

Plus 1 for the Butty's Bits throttle linkage. Fitted it and never looked back.

The linkages on the pre 72 busses has a way too many moving sections converting from a simple up down motion to a pull motion mainly because of the chassis configuration which lends itself naturally to a LHD accelerator position as that is closer to the centre of the bus. They might have even been ok when new but not after fifty years of use in road grime conditions. On the LateBay, I believe they’ve overcome this by having a simple mechanism to get the accelerator action closer to the middle of the bus but internally in the cab with just a rolling bar. I’ve been toying with the idea of a simple pedal action box internally connected to a flexi two piece cable and running it in a large loop up the front and behind the kick panels then straight down to the rear of the bus via under the mat and exiting either by the totem or even further just after the gear shift. I must finish sorting that.

Made my own ball jointed linkage , pics in Gallery under Spliffy

Defo from me for buttys kit...Awesome

Another vote for Buttys Bits, I now have a smooth graduation rather than the "stomp on it to go" I had got used to. Excellent communication and delivery too.

Looks like a really nice kit DazKamper. Would give it a go if I didn’t already have a Buttys bits.
D

@DazKamper
Please don't advertise goods on the forum unless it's in the "For Sale or Wanted" section please.
Can you also sign up as a trader if you're pushing parts and/or services.

I bought a Buttys bits linkage for my 71 on a whim as my peddle kept on seeming to get stuck and clock when pressed sometimes. I got under the van to fit it, put one spanner to the original bolts and the whole thing sheered off with little to no force applied. It was caput!
D

sparkywig said:
@DazKamper
Please don't advertise goods on the forum unless it's in the "For Sale or Wanted" section please.
Can you also sign up as a trader if you're pushing parts and/or services.
Click to expand...

Please accept my most humble apologies…would you be kind enough to email me the link to sign up as a trader as I can’t seem to find it, thanking you in advance

DazKamper said:
Please accept my most humble apologies…would you be kind enough to email me the link to sign up as a trader as I can’t seem to find it, thanking you in advance

An admin will be in touch.