I picked up a late bay 091 '6-rib' gearbox for pretty cheap a few months ago, this being because it was missing a few bits - all the clutch gubbins in the bellhousing along with the nosecone and hockey stick. Now, I am presuming the only reason these parts got stripped off is because there is something wrong with the main internals, but for now I'm putting everything back on the bugger to find out at a later date.

Whilst trawling forums for the best mis-information education the internet can offer I did read some very helpful stuff. I can't remember where, but one thread/webpage mentioned upgrading the nosecone on the original earlybay 002 gearboxes to the later 091 nosecone to improve sloppy shifting. This intrigued me, and as I have my original 3-rib 002 transmission on the floor right now I thought I would investigate.

For those that have no idea of the differences the early bay 002 nosecones use two bushings to guide the hockey stick (officially know as the shift lever I think), which is pushed/pulled and twisted as you change gear. These parts receive very little, if any, lubrication and so wear substantially over time. If you are having a hard time shifting with your original transmission, these parts are likely worn. When VW developed the later 091 transmission they addressed this issue, and so the 091 nosecone uses two special roller bearings instead of bushings.

As it happens I did not buy the above new part as I found a bundle of two 091 nosecones with the early 2-stud mounting bracket castings on ebay for cheap. When they arrived I found they also had the roller bearings still pressed in place. Turns out when I cleaned them up one had fairly substantial corrosion to the alloy, so will probably go in the bin. The other is pretty good still though.

So, picture time. Here is my original early 3-rib transmission:

The nosecone is the part on the right with the pole-like protrusion and it is secured to the rest of the transmission with lots of studs and nuts around it's edge.

As oil does flow into the nosecone through the bearings hidden in there I decided to drain the whole gearbox. The drain plug is located at the bellhousing end opposite to the nosecone. This took some time as it came out slowly like thick black treacle - probably never been changed!
As the oil was draining I removed the shift coupler (the metal cradle type-thing at the end of the nosecone). This just has one grubscrew to secure it onto the end of the hockey stick.

With the shift coupler off you can undo all the nuts around the edge of the nosecone, and it will then slide off the studs and the hockey stick. As a side note be careful not to loose these nuts - the studs are M7 threads, so a rare size. Here's a pic with the nosecone off:

I have read numerous threads where people mention the big shiny bearing in the picture, the main thrust bearing, being forced into the nosecone, and wearing into it's relatively soft magnesium alloy casting. This bearing slopping about apparently results in a noisy transmission at best, and disasters further along if not fixed. The way to tell is check the inside of the nosecone - if the area circled below is worn lower than the rest of the machined edge surface you've got this problem.

The remedy for the above is to buy a steel 'thrust' plate to insert in between the nosecone and the rest of the transmission:
Steel Thrust Plate
To fit such a plate you are suppose to get the mating surface of your nosecone machined down, removing an amount equal to the thickness of the plate. I am not sure if you can get away without this machining. On another side note, I don't think the later 091 transmissions have this problem as the same bearing has a locking wedge holding it in place.

Moving on... inside the nosecone the end of the hockey stick (shift lever) locates into a ball joint in the shifting mechanism: 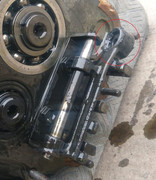 Some of these balls were apparently made of plastic and did not last very long. Most surviving to this age will be steel types, but these can still get a lot of wear over time so it is worth checking out if you're in the area. To remove the ball it needs to be swivelled sideways in its socket - you will see it lines up with a 'slot' in the socket and can then be removed. Reinsert in the same manner. If yours is worn then replacement balls are available:
Shift Ball

The late 091 shift selector assembly is spring-loaded, and so when in neutral your gear stick will want to return to a central position. The early 002 assembly is simpler and not sprung:

Apparently some people do not like the feel of the later sprung shifter. If you enjoy your gear stick feeling 'loose' in neutral then don't bother changing these parts. If you would like to change the shift mechanism you can buy all the bits individually, or order the whole lump which according to Weddle just bolts straight in to the early 002 transmission:
091 Sprung Selector Assembly
This mechanism is well lubricated, so shouldn't have much wear. As such, ignoring everything else above and just changing this part won't help you shift better. Apparently it's more of a 'feel' kinda thing and not normally necessary.

So to test everything out I relocated the hockey stick into it's ball joint, guided the 091 nosecone onto the stick and then onto the mounting studs. I then threw a few of the nuts back on to secure it, reattached the shift coupler and had a play about. Moving the hockey stick and turning the transmission input shaft by hand the whole thing appeared to shift normally, but there was a big improvement - huge reduction in play, even though my hockey stick is worn. In the pic below the original 002 nosecone is in my hand and the later 091 nosecone is fitted to the transmission:

I have not tested this running in the van, as mine is still being restored, but from this experimenting about I would recommend this change to anyone with an old original early transmission that has never had any attention. It's simple, new parts are available, and I believe will have big positive effects to your shifting. Oh and you will most likely need to replace the nosecone gasket, something I forgot to mention earlier. Mine tore up as I removed the nosecone, but as the transmission is drained of oil and on the floor at the moment it doesn't matter yet. The new gasket is turning up with the new hardened hockey stick I've ordered, so more faffing about is due when the parts turn up.

Lastly, the dirt seals are different on the 091 nosecone to the 002. If you buy the new reproduction nosecone I linked above it looks like it comes with the seal (and hopefully the roller bearings - best ask if ordering). If you need a new 091 seal here's a link:
Selector Seal
There is also a 'dust cover' or rubber boot that fits onto the end of the 091 nosecone, and should be installed to help keep crap out of those nice roller bearings. These were no longer available for quite a period it seems, but looks like Heritage now have repro ones available:
Nosecone Rubber Boot


One resource that has been invaluable to me is the Ratwell Site. If you want to read up on the late 091 transmission bits in more detail, with better pictures, check out this excellent article. Note some parts listed as NLA are now available again:
Ratwell 091 Transmission Refresh

A similar excellent article detailing the early 002 transmission was posted in 1997 by Ron Van Ness here:
'71 Transmission & Shift Rod Make Over
This covers much more stuff than just the nosecone gubbins, so well worth studying if you're a novice like me.

Hopefully this post is useful to some, maybe even make up for me asking daft questions a bit. If you do decide to investigate and/or upgrade the nosecone parts above it would be great to hear what you think to the results.

That’s a very informative read thanks for posting. [emoji3]

I had my three rib gearbox refurbed last year by John Walklett so I assume these bits were looked at then. Nice to see that more parts are becoming available than a few years ago. Maybe because after 40-50 years, parts are starting to wear out so there is a demand.

Fabulous article. Even the dim witted members (me) could follow that, it sounds like you have a life times experience in possibly engineering and definitely in writing for the mentally disadvantaged (again me). But the treacle, is out there waiting to spoil everyone’s day as it gets more solid it gets less splashy abouty too :shock: I know I haven’t checked mine for at least two years and it’s deffo on the 2do list for this winter and I’m guessing it’s about item one hundred and twenty four Anybody reading any of this had best get checking too with one absolute pearl of wisdom from me, before you drain any dam thing from any damned where, make sure you A. Have something to put back in, and B. Someway to put it back in as in suitable bottles etc, and C. Somewhere to get it back in, Actually undo your filling point, not just loosen it or crack it off, but take it right out so you’re a hundred per cent sure the oil will go back in. If poss, do it warm as most of the crap will be in suspension and it’ll drain nicer, hard to do though if the box is out :lol:

Glad you liked the writeup Gents. If I'd thought at the time I would have taken some better pictures. I thought I was due to try give a little something back to the 'net for once.

Mike - how was your experience with John Walklett? I think I've seen his name mentioned on here before. If the 6-rib box I've got turns out to need major surgery I'll be looking for a transmission refurb guy, possibly play with the ratios too depending on what state my engine ends up in.

Ozziedog, good words to note there! You're right I do have a bit of an engineering background, sometimes it's useful