The holders came with some Sunpro gauges I bought, probably available on their own from eBay or suchlike. The Berg is king of shifters

I sold the split (which was a shame, but i needed the cash!), bought a t25 which i converted to an audi 1.9tdi, which i sold, then bought a T4, which i'm trying to sell to make room for the early bay arriving on tuesday!

So finally the corvair is running sweet

A trip to the rolling road last week pinpointed that it needed larger air correctors in the carbs just to get the fueling spot on at high revs. So this morning these were changed and the results were spot on fulleling right the way through to 100mph 8)

So we have 115bhp and 155ft/lb of torque, the result is a motor that pulls and keeps on pulling right the way through to 5600rpm. The torque curve is nice and flat and low down the range exactly where I need it.

Hopefully now I can sit back and enjoy the ride at last :msn4:
H

Great work Justin. Great to see....and even better to hear

Nice one, love it

Wow photobucket is back up. Great to have my pics back
M

I’ve been building a 70 bay with a Corvair and powerglide combo. Been searching the internet for years about it, and just found your pictures from this thread. Sweet!

First question of a million... what are you using for baffling to seal the top half of the engine from the bottom? They look like sandbags from way over here in the states.

I added a photo of mine... hopefully it loaded.

Hi Matt, Creation Blue doesn’t get on here as much as he used to as he’s a bit busy with other stuff at the moment. Not toooo sure if he’s checking this thread still as his last hit was 2018. I’ll get a hold of him over the weekend if I can and I know he’d love to chat about his bus conversion. Good to hear from over the water during our lockdown, moreso now it’s relaxed a tad. :mrgreen:

Good to see another Corvair powered bus! Wow it’s been a while indeed since I posted on here! Lots of updates on my IG, you can find me using the same user name as here. Engine has just been out whilst I changed the gearbox from a 6rib 091 to a 3rib with a longer 4th.

As for the question about the seal, I made a tin section to cover the area around the gearbox then used the VW seal for a type4 engined bus, I cut a doner valance (kept my Og one) so it all looks stock when the engine lid is closed.

I see you have looped the oil filter lines, are you not adding a remote filter? Mines under the battery tray

What do people use to host pictures these days, I have a photobucket account that wants to charge me and tells me daily that I’ve used my limit. Probably why I stopped using this when the pictures disappeared. Something simple, just like me
G

Give Sparkywig a shout he will talk you through it.

Cheers Wig, will have a go later

So a bit of an update. Nothing really changed over the last few years, Corvair engine running well just could do with a longer 4th gear, which let’s face it is the main issue if your running a big engine. So the opportunity arose to purchase a recently rebuilt 002 gearbox with a longer 4th. I also had an oil pan leak that I was unsuccessful in fixing last summer and a noise that I suspected was the gearbox that again was unsuccessfully investigated last summer when the engine came out on my drive to replace the clutch bearing.

So with the 002 gearbox in the garage, the new oil pan seal waiting and a few jobs on the engine planned namely new lighter duty breather connections and a permanent solution to blocking off the hot air ducts on the engine other than the gaffer/aluminium tape and with some extra time on my hands I got started. 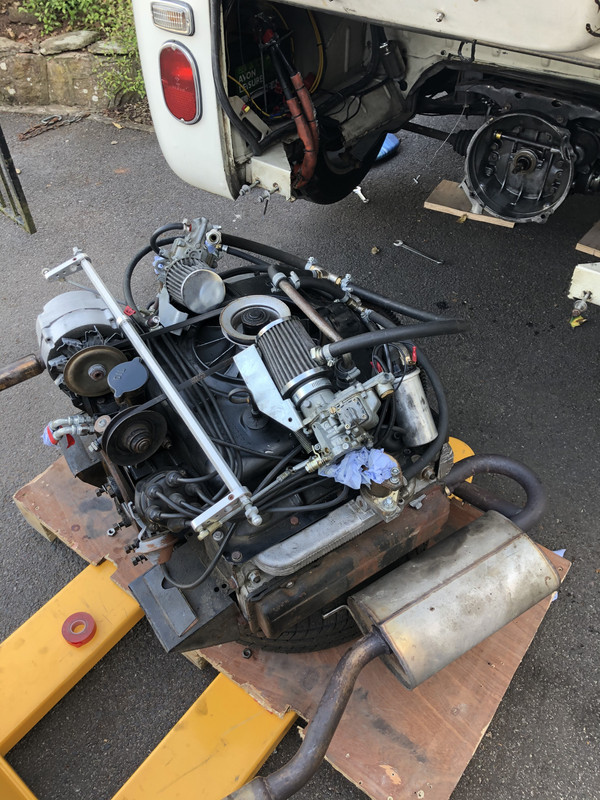 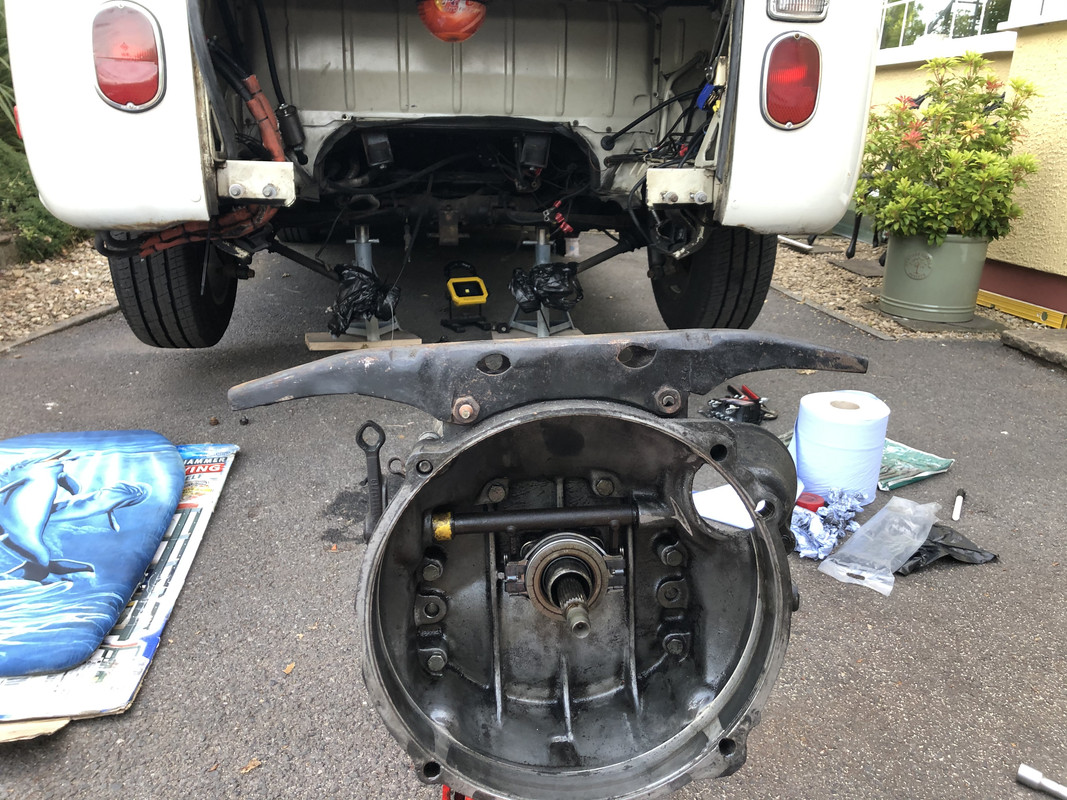 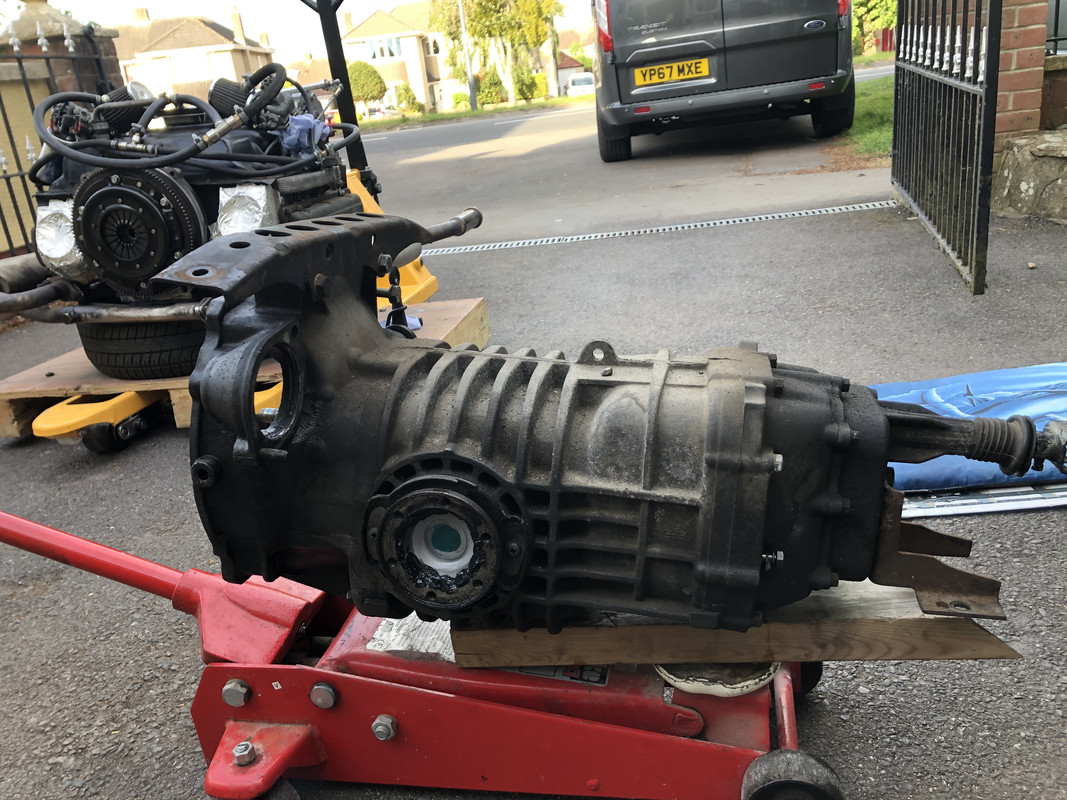 Gear rod out and bushes were replaced 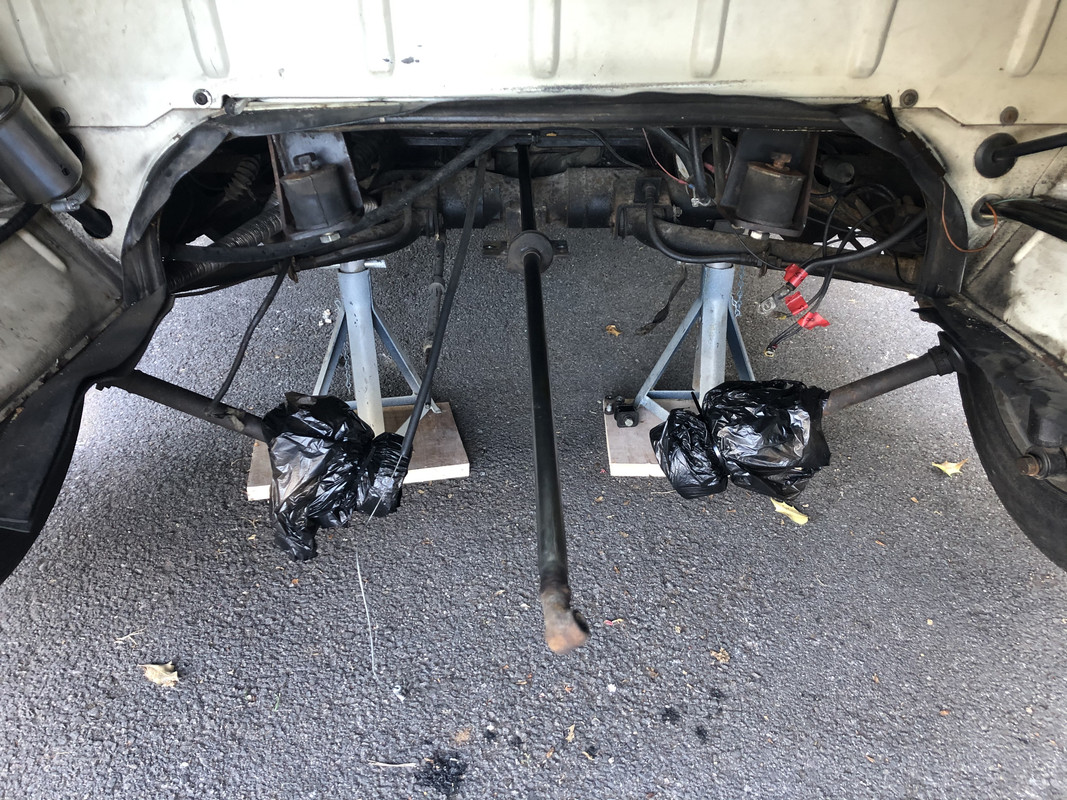 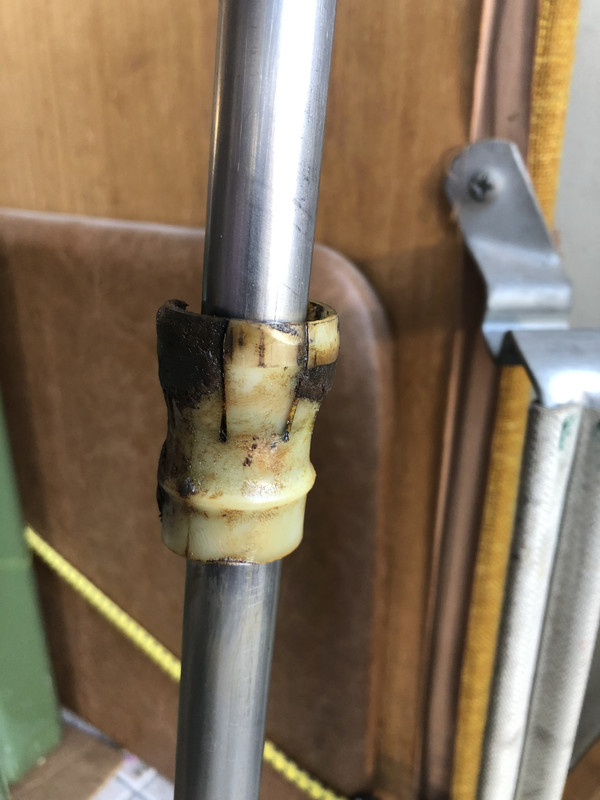 091 with 002, seals were replaced on final drive on the 002 just in case, note new oil seals a lot thicker than the old ones that were only replaced 2/3 years ago and weeped 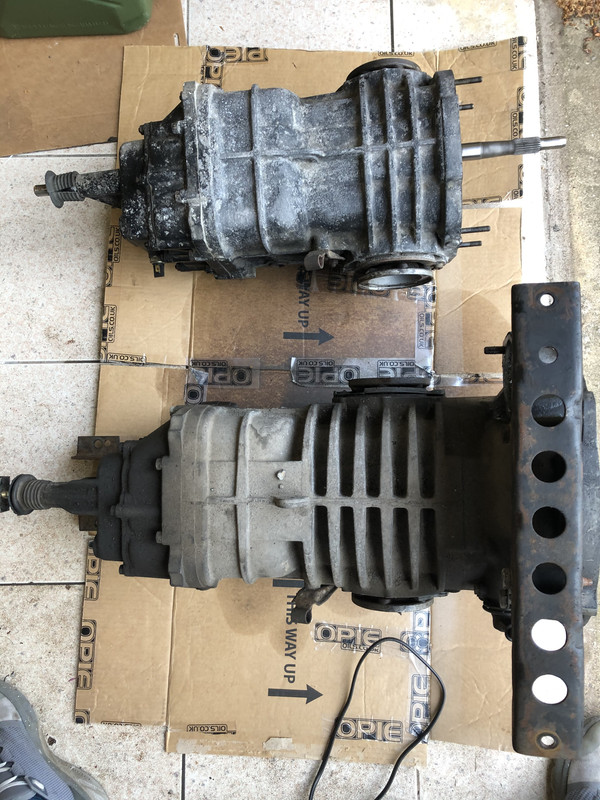 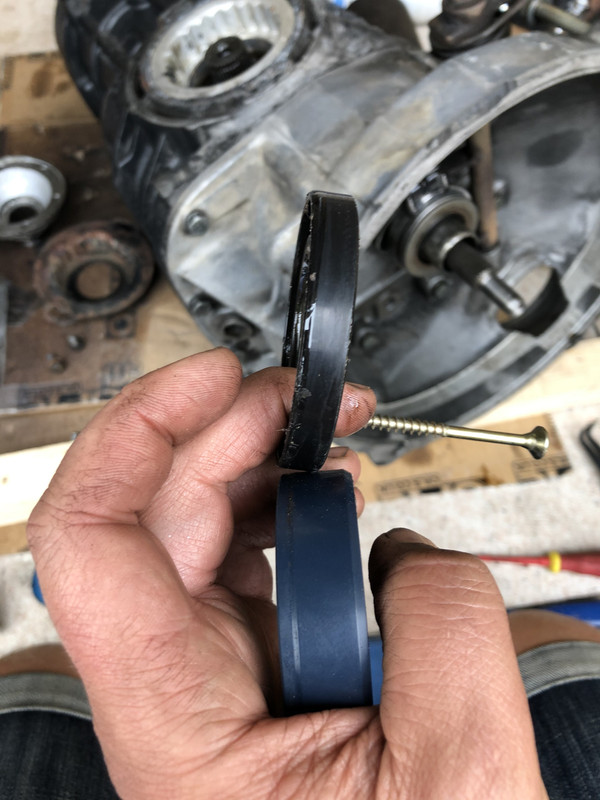 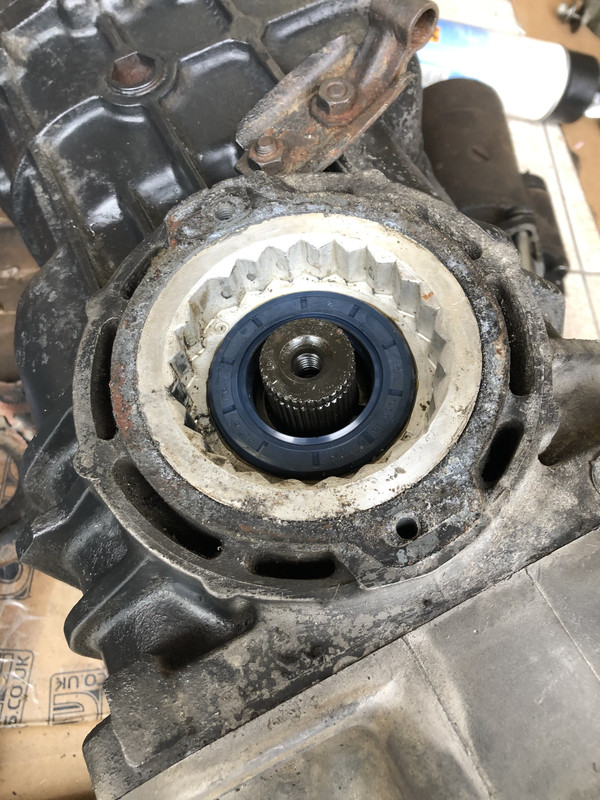 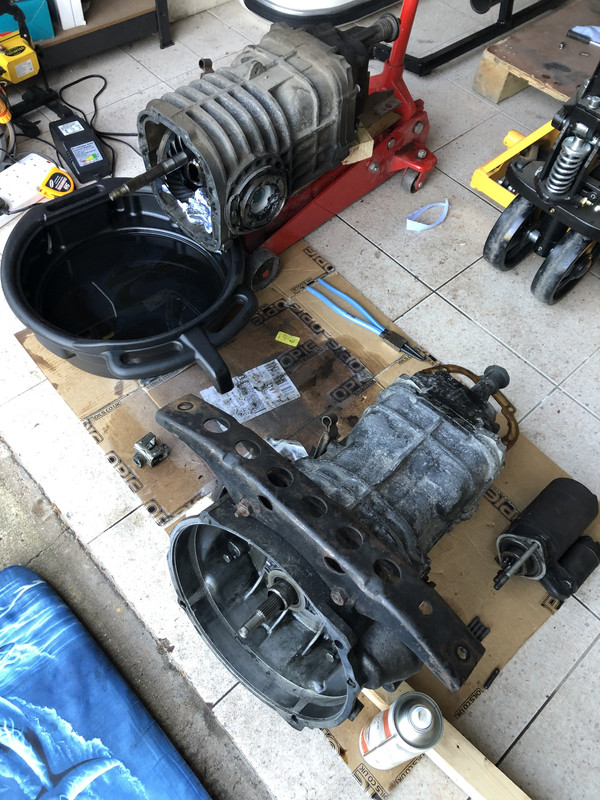 Whether or not the 002 will prove to be strong enough remains to be seen. A bit of paint 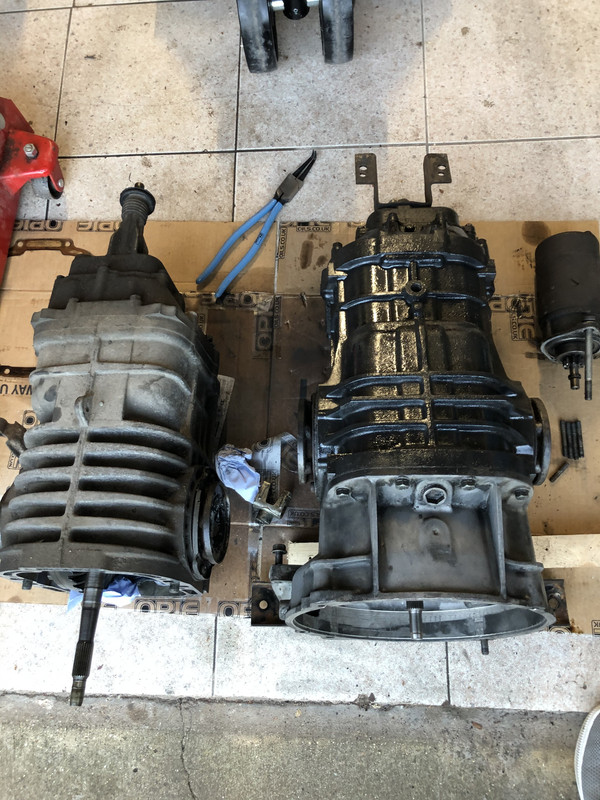 I was looking at a solution to get heat into the bus, I figured I could weld a plate with a spigot over then I noticed there was 3 threaded holes, so had a rethink and made some alloy plates and loc-tited them in place. As I need to work out a valve system for the heating I have shelved the heating system for now but should be easy to do in the future with these removable plates 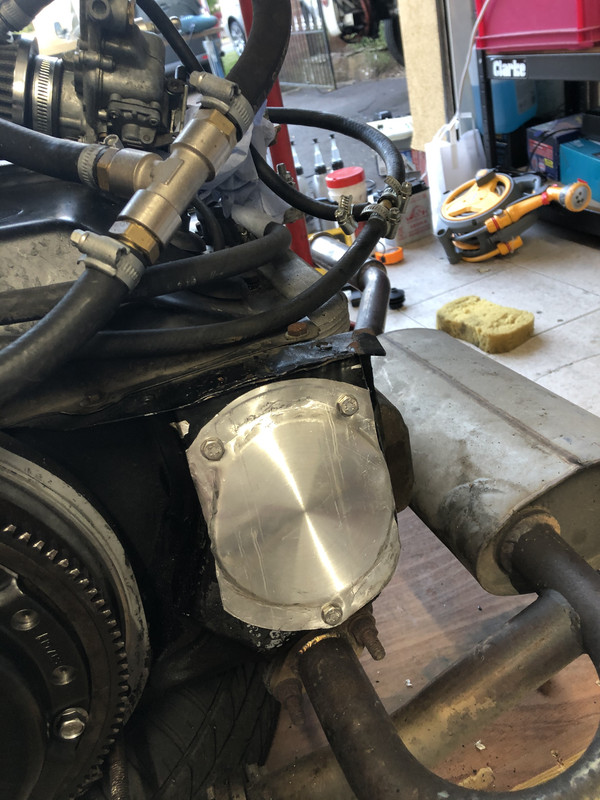 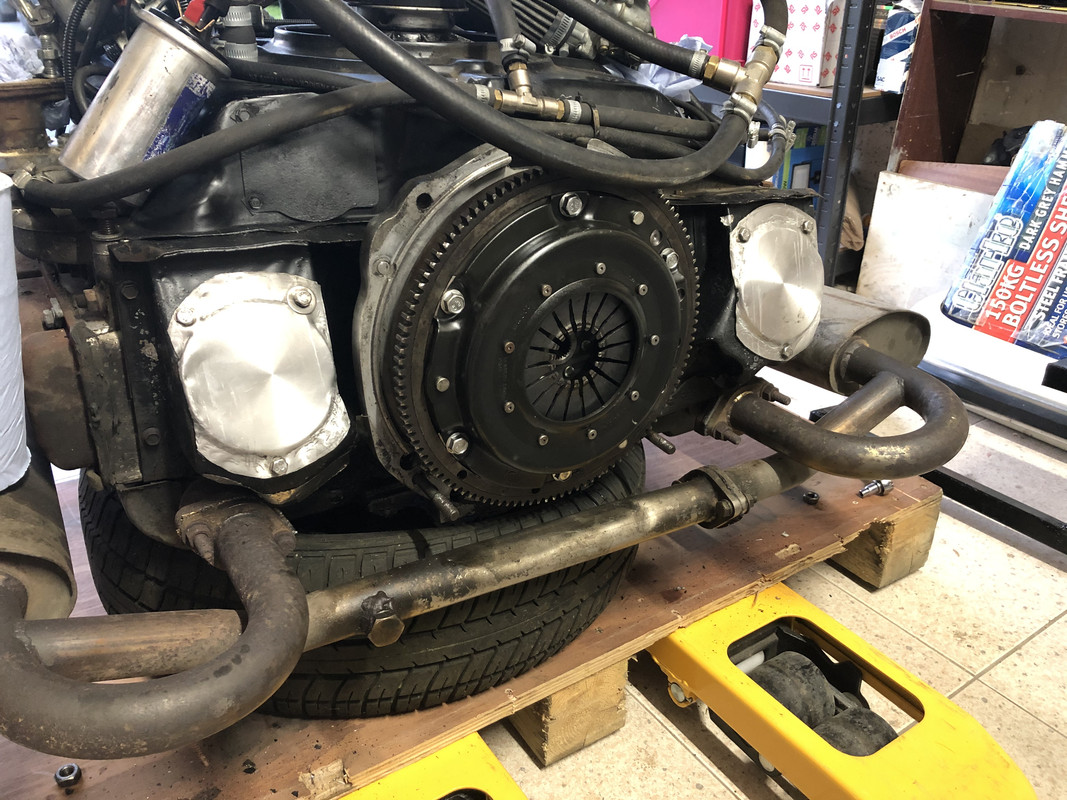 I also had an issue where the alternator packed up on a really hot run back from Camper Jam, I had it repaired locally but since has always pumped out 16volts, when returned to the repairer his machine indicated 14.4v, I figured his equipment was at fault so went for a second opinion, yet you guessed it, they had the same 14.4v results. So I’m still at a loss with this one, my fluke meter and VDO gauge both indicate 16v whilst running??

002 box in, was a bit worried with this as an 091 box needs to be modified to fit an Earlybay and I recall the guy who fitted it had to modify the nose mount to make up an inch deficit, luckily he drilled the mount and moved everything back at the time when mounted to my 1776 engine, so with the 002 mounted as VW intended everything lined up and all gears present and in good order 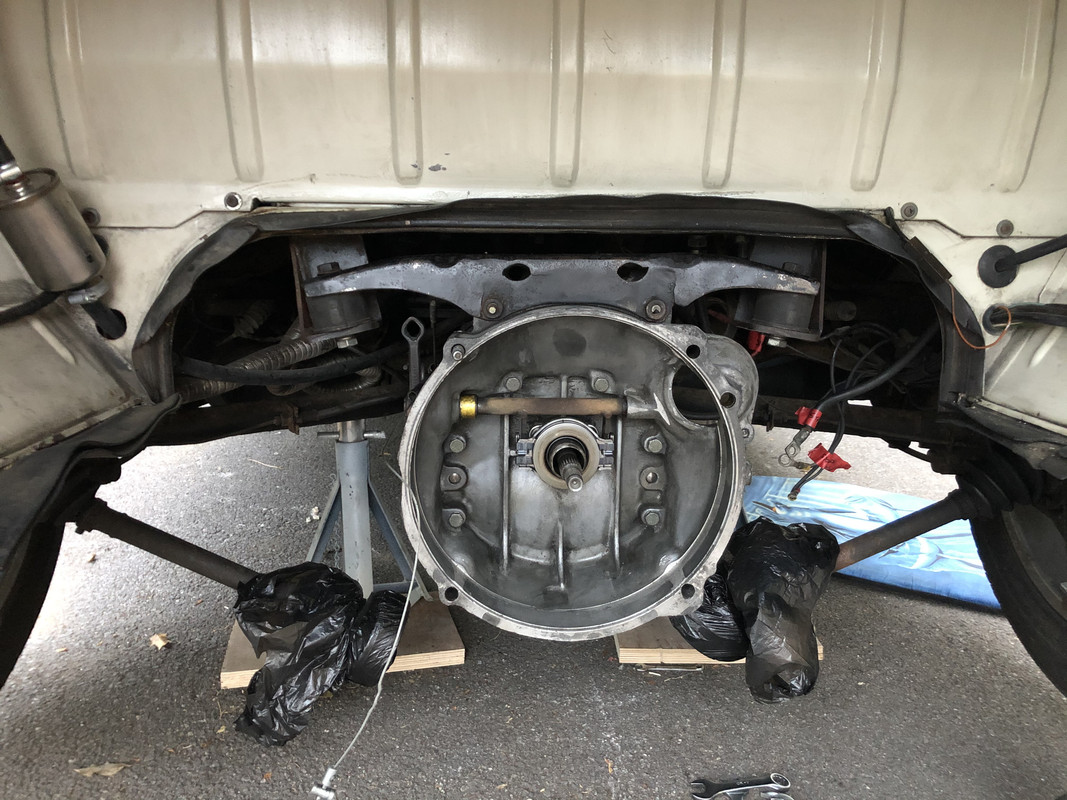 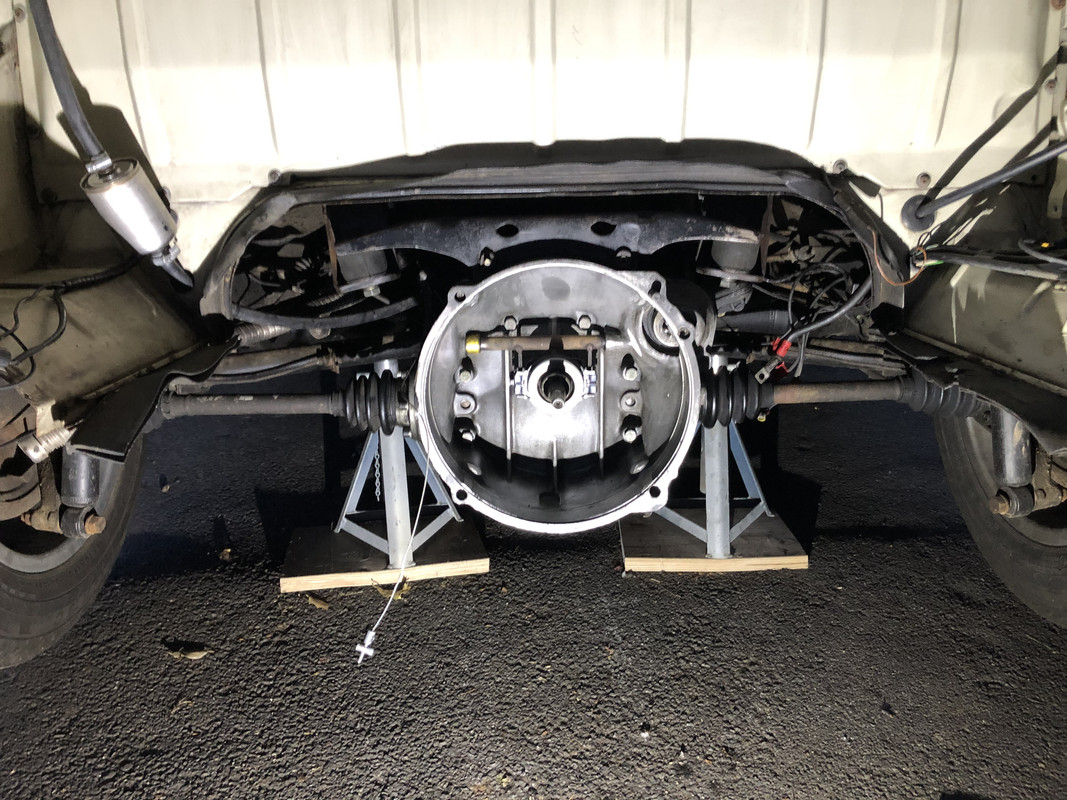 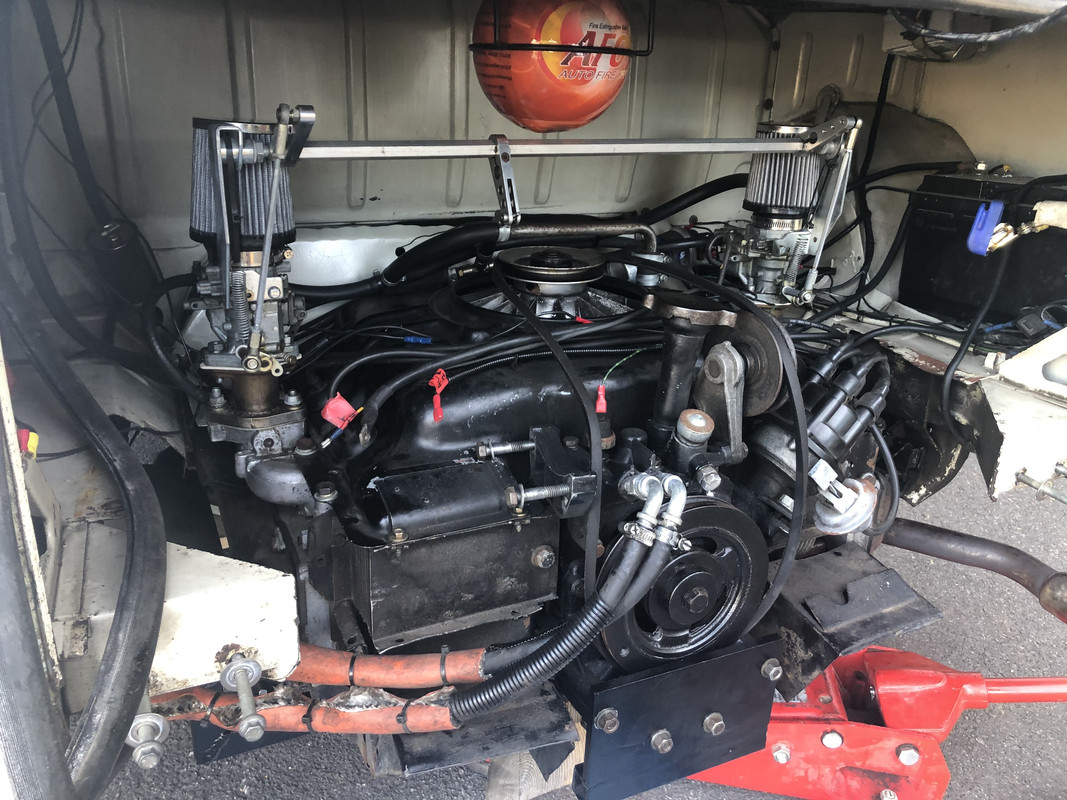 Alternator back and engine connected with freshly painted valance 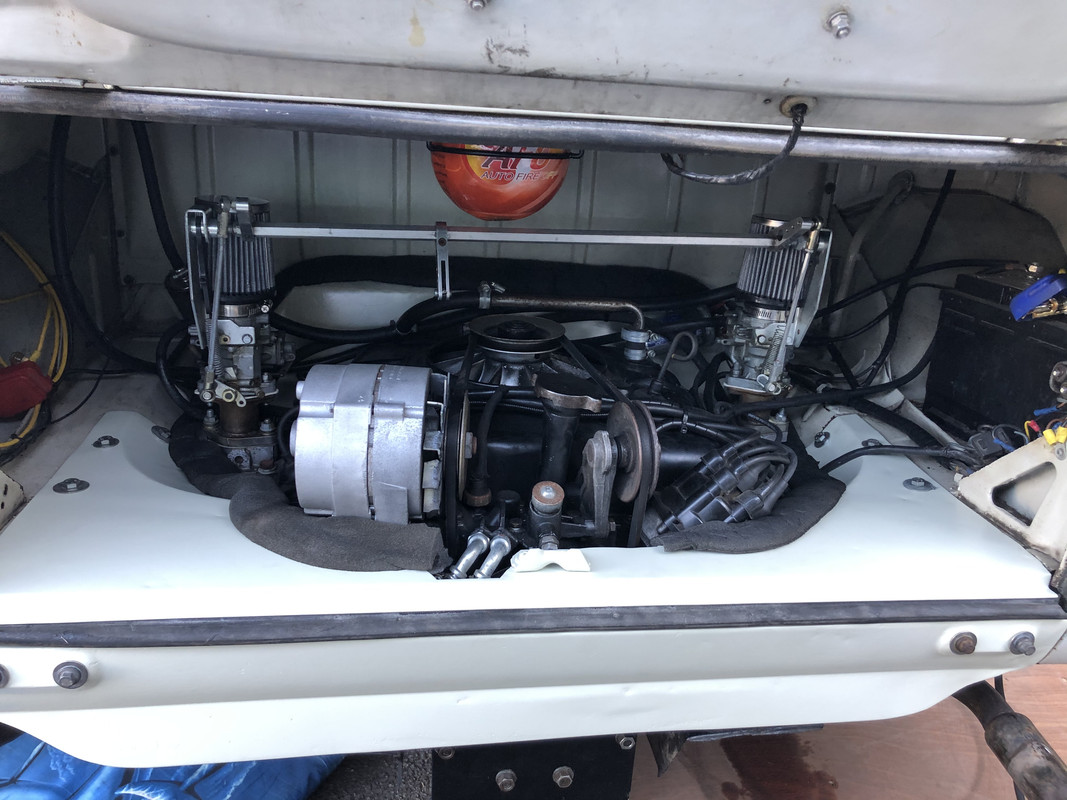 At this point I went to CJ Motors and used Nicks 2post ramp to change the oil pan seal, the last time I attempted it was on my drive, it was hot and cramped under there and once was reassembled it leaked more than it did before! Pissed off to say the least!! This time I prepared, cleaned and the most important this was knocked the oil pan back into shape where it had been over tightened it had deformed.

Back home and final assembly of Westy towbar and bumper, the most fiddly part of the who job! 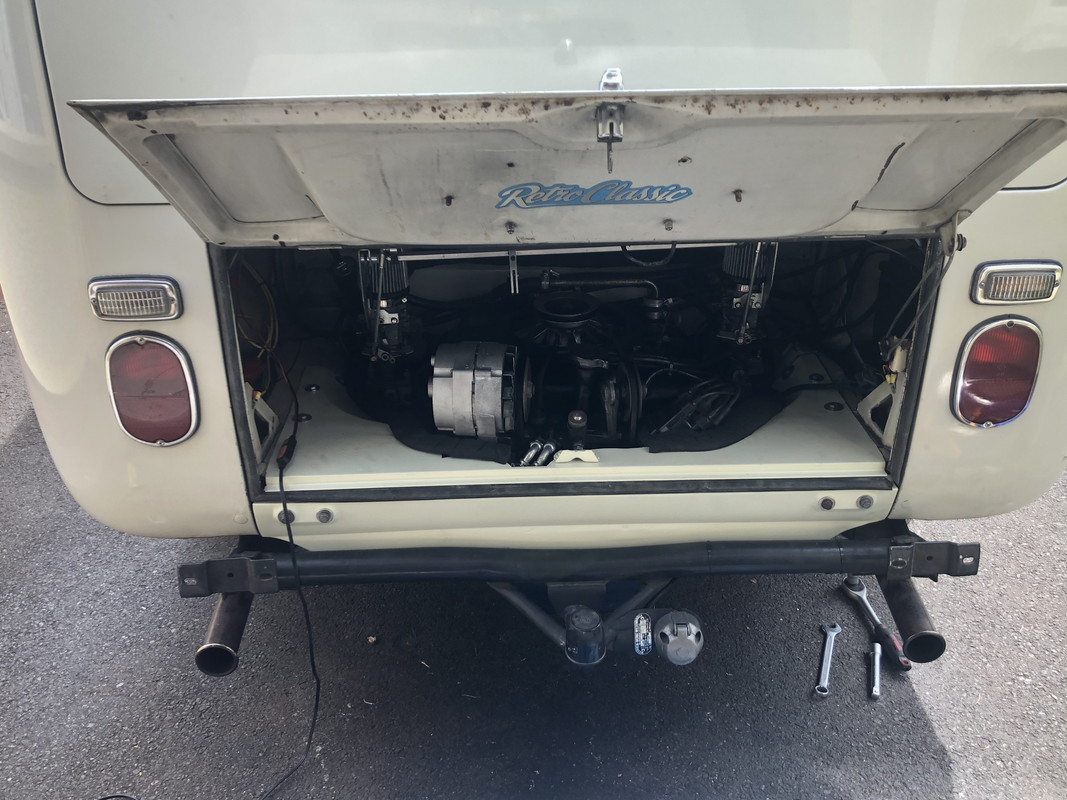 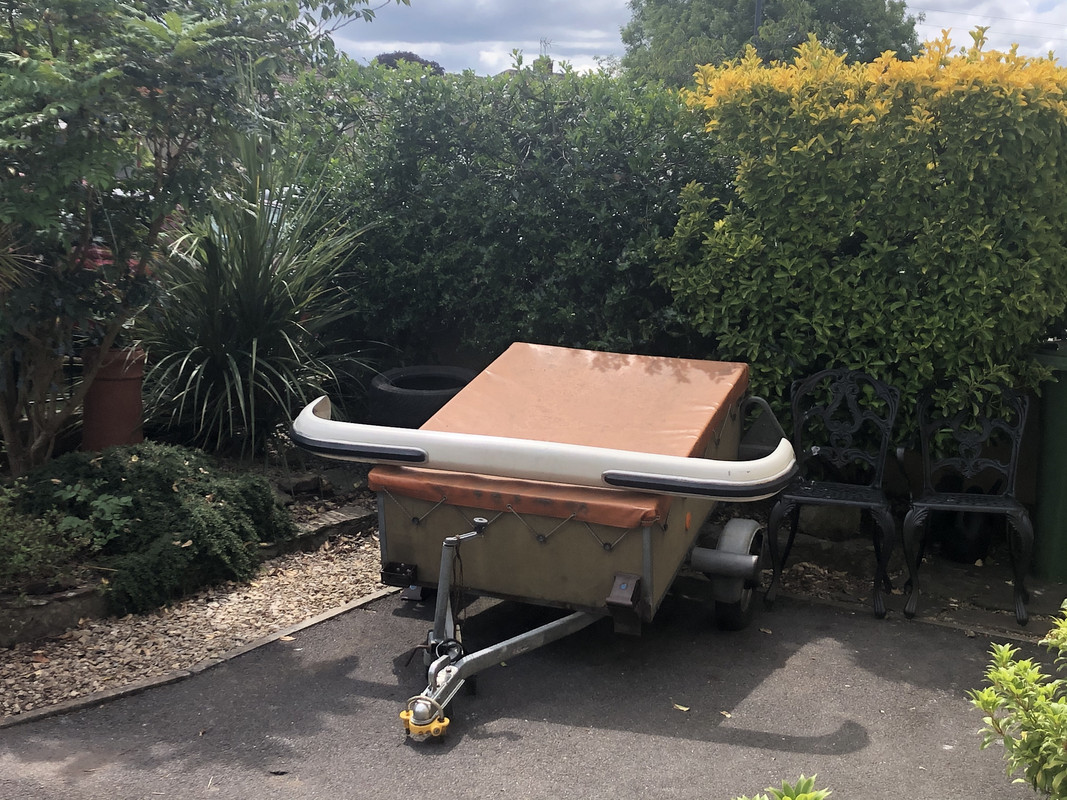 And back in the game 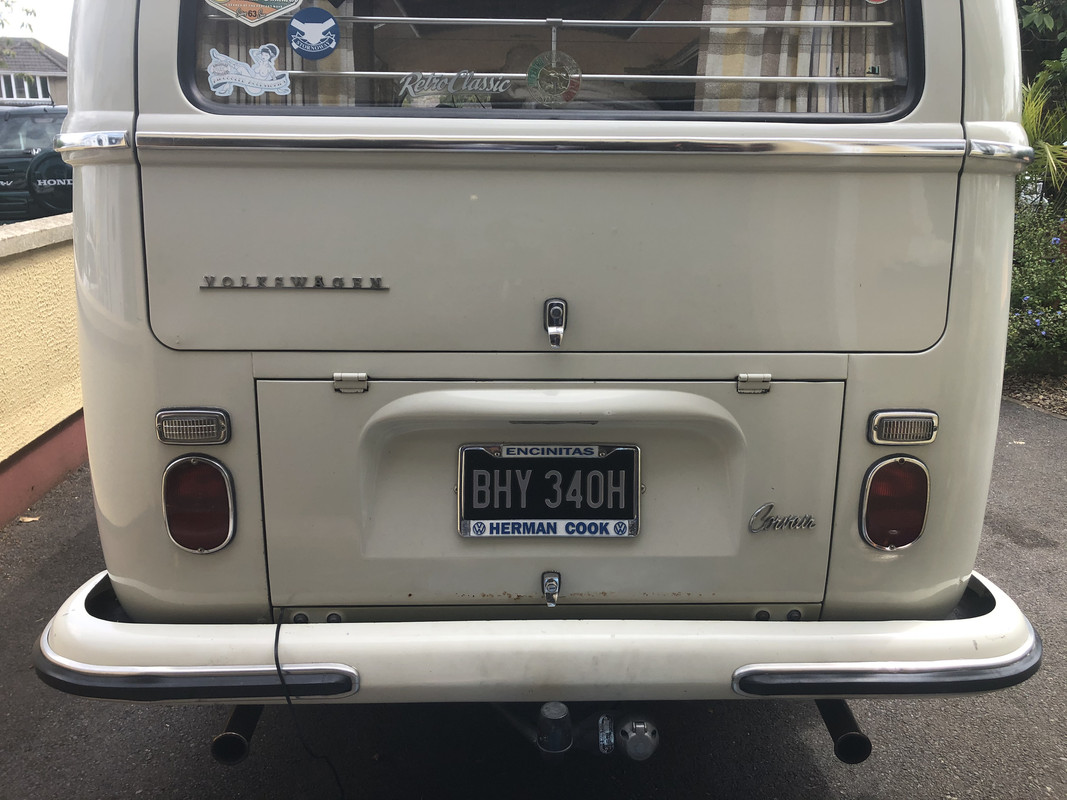 So the noise I was experiencing which I thought was gearbox related is still there, it was when changing direction mainly when reversing out the garage, only happens with clutch depressed so I can’t get out to investigate! Nick had a listen at the garage and says it sounds like a vibrating tin type of noise, good news is it’s nothing to worry about and I know my 6Rib box is a good spare. The 002 box has a noticeably longer 4th which is well suited to the engine and will make cruising easier on the ears!

Gear shift is smoother with the new shift rod bushes and the vibration I had through the gearstick seems to be greatly reduced, I’m not sure it’s completely gone but a motorway ride out will confirm for sure.

Hope everyone is well during these tough times

Brilly willy is that Just.

Fantastic work and looking as smart as ever

Good to see you back on here and getting stuck into the van... never-ending projects that they are!

We have an 091 with a freeway flyer; any idea what difference that makes to the 4th gear ratio compared to a 002 with the longer 4th?

Thanks for the welcome fellas, nice to see some old friends still active, was really looking forward to the usual shows again this year but I guess a year off in the whole scheme of things ain’t a bad thing.

Always doing something to the van just lost interest after the pictures disappeared and use IG, postimage was simple enough so will update more often.