So I'm still in the process of rebuilding my front brakes, got the parts just lacking in time! I've stripped them down and got new flexi hoses/ backing plates & cylinders.
I'd like to check on a few things from you good people who know what you're doing (unlike me!)

Re-assemble:
a) fit new flexi hoses
b) fit new cylinders & old connecting line to new backplates (is there any tips for getting the cylinders mounted to the backplate as I'm struggling to get the bore through?)
c) refit all of this back to the steering knuckle
d) reattach the brake shoes, springs and adjusters (using copper anti-seize on the adjusters)
e) refit bearings/ drum.
----when refitting the bearings & drum should I clean out the old grease and add new?
----also given I'm replacing the backplates, I was going to paint the outside of the drum using some VHT paint. Any recommendations?


Final thing is I think I knackered the rigid pipe on the nearside so guess I'll need to replace that (see pic below). Is that just a case of unscrewing at the other end - 'T' connector(next pic below)? 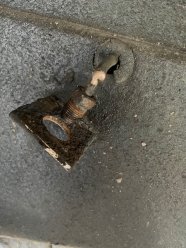 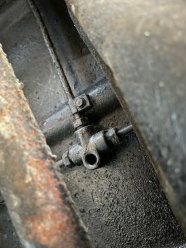 many thanks as always!

Sounds like you’re pretty much on top of it. With your adjusters, take them off completely and clean them up as best you can , using a vice here is ace, I used a brass haired wire brush on mine, then cleaned them up with anything you like, maybe white spirit or paraffin. Once cleaned, smother the threads in assembly paste and run the threads up and down a good half a dozen times, a cordless can be great for this . Up down , up down, until you’re sick of it and they’re spinning up and down as easy as can be. Then clean the whole shebang up again and get them spotless then when you assemble with the magic paste, just use the tiniest dot of paste. Yes clean out all old grease and pack with new, again use more than you think and sacrifice some and wipe off as required, the grease caps on the ends are not for putting grease in by the way, they’ll just catch any that runs off in the future. Absolutely anything that looks like it mighty need replacement in the next century gets the chop right now, anything that may have seen a spec of rust or even had a spanner slip mark on it can be ditched and replaced. Fitting the back plated, paint the outside with cheapso hammerite but don’t bother with the inside, painting the brake drum, anything will do but again only paint the outside I cleaned up both my front drums and wheels a couple of years back and got some spray cans ready to paint and I noticed amongst my stash of paint cans that I had some heat resistant silvery hammerite type paint in amongst all the cans that I pick up from Lidl on a regular basis. Whenever I’m getting ready to paint something and I’m looking at my paint stash and wonder why I keep buying it I turn all the cans over and give them a tiny shake and put them back in the opposite way to what they came out then wander about the garage shaking the can I’m about to use, shake shake shake, turn the can around shake shake shake ala K. C. And the sunshine band, I sing that too when I’m doing it it’s a wonder I get anything done at all shake shake shake,,,aaaahhhh shake shake shake,,, spray your brake drums, spray your brake drums. Anyway, I sprayed mine when I was going for that ‘OffRoad’ and ‘Raised’ look a couple of years back and in amongst cleaning and singing and spraying and several coats later, I was tidyin up and getting rid of the cans into the bin, then giving all my stash a little shake as I tidied that up too and I noticed I had some more heat resistant silvery type paint ,,,,,Hhhmmmmm, didn’t know I had that much??? So I look at the cans I’ve used and I’ve used the wrong ones toooo much pissing about and not enough concentrating on what I’m doing, so all that painting was done with regular Lidl hammery effect paint and it’s still good a few years later
Not too sure what you re on about with the bore ??? 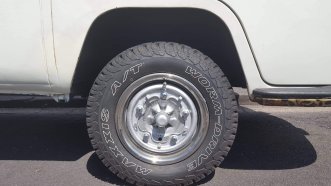 So the bore is the hole in the backplate I'm trying to get the cylinder through like the pics below. The old backplates seem to take the cylinder but the new backplates from JK don't 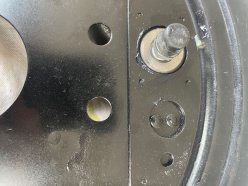 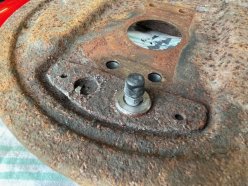 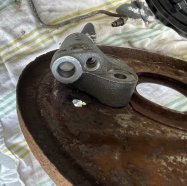 Badly made pattern part, take a file to the hole carefully .